Home › Marketing › The Secret to Telling Your Brand’s Story

The Secret to Telling Your Brand’s Story 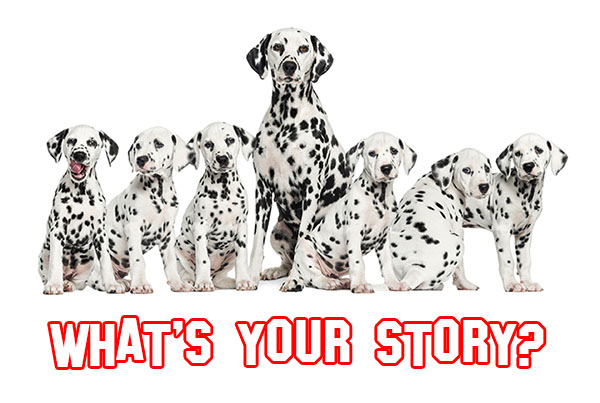 Connecting with your audience isn’t just about churning out content at a torrid pace. To really make a positive impression on the viewers that matter most, you’ll need to find a way to tell your brand’s story. While this might sound a little over the top, few things are as powerful in the digital world as a story that goes viral. To help your brand join the ranks of other successful online storytellers, here’s everything you need to know about telling your brand’s story.

The Power of Great Storytelling

Of course, for the people sitting on the fence about branded storytelling, a little convincing might be in order. To help prove the power of this process, look no farther than the examples offered up by Andrew Davis during his presentation at the Content Marketing Institute’s Content Marketing World expo.

In his keynote speech regarding the effectiveness of branded storytelling, Davis utilizes a few key examples. First, in a blast from the past, Davis invokes the run on Dalmatian puppies after the 1961 original release of Disney’s “101 Dalmatians.” While the connection between an increased run on Dalmatians and the captivating story found in this movie might seem like nothing more than a coincidence, Davis goes on to point out two more contemporary examples to prove his point.

If you’re a fan of the TV show “Mad Men,” the inclusion of Lucky Strike cigarettes and Canadian Club whisky regularly in this series helped boost sales for these brands by 44 percent and 4.3 percent, respectively. As for the younger audiences, MTV’s reality series “16 and Pregnant” has helped increase the sale of condoms and reduce teen pregnancy since it started airing in 2009.

By now, the common theme between all of these examples should be clear. If you can connect your brand in some tangible way to a great story, expect a major response from the target audience.

Of course, your brand might not have the benefit of showcasing its offerings in a major motion picture or award-winning television series. Thankfully, the world of online content marketing and storytelling is just as, if not more, powerful as these conventional forms of media. In his look at some of the most successful brands in the digital storytelling arena, Christopher Ratcliff of Econsultancy highlights a few key characteristics found in many of these popular online campaigns.

First, Ratcliff notes that these attempts at storytelling go beyond brazen sales pitches and rely on subtlety to reveal the branded message. By incorporating anecdotes, metaphors, or even recounting situations in which your brand’s products and offerings play a vital role, you can skip over mundane, traditional advertisements and create something truly memorable.

As far as the format of your content story, James Curtis, also of Econsultancy, notes that having a beginning, middle, and an end as your standard template, whether dealing with a blog or a YouTube video, is the best way to keep your audience focused and engaged. Naturally, this story can span several forms or media and eventually evolve into more complex storytelling formats, but as the foundation of a new focus on telling a branded story, it’s hard to go wrong with this approach.

Once you have this content ready to go, it’s time to connect with your audience. Unfortunately, simply posting this blog post or other piece of content on your page and calling it a day simply isn’t good enough. To truly spread the world about your story, don’t be afraid to do a little promotion on Facebook, Twitter, and all the other relevant social networks.

In some cases, connecting with a related site and submitting your story as a guest post can provide your brand with access to an entirely new audience. By incorporating this type of outreach, along with everything else you’ve learned about storytelling in the content marketing world, there’s nothing stopping your brand from engaging with the consumers that matter most via this powerful process.

4 Step Studio is an online marketing agency that specializes in website design and redesign, SEO, social media and more. Our team of experts focuses on helping small business get found online, while educating them on what will make them successful in the digital world. To learn more about what we can do for you, visit our website at www.4StepStudio.com